If there’s one book you should read this summer, it’s London: Immigrant City. It’s finally available in English and it can be purchased at Foyles or Waterstones. 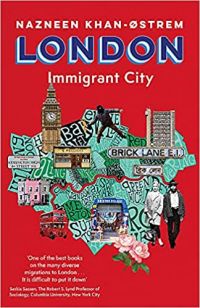 ‘One of the best books on the many diverse migrations to London . . . revealing the extent to which the diversity of immigrant origins has had transformative effects – through food, music, diverse types of knowledge and so much more. The book is difficult to put it down’
– Saskia Sassen, The Robert S. Lynd Professor of Sociology, Columbia University, New York

Is there a street in London which does not contain a story from the Empire? Immigrants made London; and they keep remaking it in a thousand different ways. Nazneen Khan-Østrem has drawn a wonderful new map of a city that everyone thought they already knew.

She travels around the city, meeting the very people who have created a truly unique metropolis, and shows how London’s incredible development is directly attributable to the many different groups of immigrants who arrived after the Second World War, in part due to the Nationality Act of 1948. Her book reveals the historical, cultural and political changes within those communities which have fundamentally transformed the city, and which have rarely been considered alongside each other.

Drawing on London’s rich literature and its musical heritage, Nazneen has created an intricate portrait of a strikingly multi-faceted metropolis. Based on extensive research, particularly into aspects not generally covered in the wide array of existing books on the city, London manages to capture the city’s enticing complexity and its ruthless vitality.

This celebration of London’s diverse immigrant communities is timely in the light of the societal fault lines exposed by the Covid-19 pandemic and Brexit. It is a sensitive and insightful book that has a great deal to say to Londoners as well as to Britain as a whole. 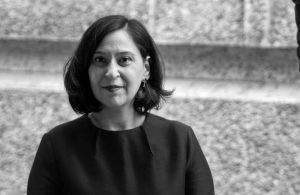 Nazneen Khan-Østrem was born in Nairobi and is a Kenyan Asian of Pashtun descent. Raised in the UK and Norway, and still a British citizen, she has worked as a television presenter for NRK and an arts journalist for the Norwegian broadsheet Aftenposten. Nazneen graduated from the London School of Economics with a MSc in International Relations in 2000 and started working as an assistant professor in Journalism at Oslo Metropolitan University. Her first book, My Holy War, about Islam and identity, was published in 2005; and in 2007 she was selected for the Edward R. Murrow Exchange Program in Journalism by the US State Department. Nazneen joined Norwegian publisher Aschehoug as a commissioning editor in 2011 and is now a staff commentator at Aftenposten.