Co operation between the embassy, the Church and Statoil resulted in 1982 in the Norwegian School being set up in Wimbledon/London. The only Norwegian school in the UK. On its own site it still continues to produce the “Norwegians of Tomorrow”.

The Norwegian school began in the autumn of 1980 in classrooms hired from an English school. On the 9thMarch 1982, the Norwegian Minister of Education, Tore Austad officially opened the school at 28 Arterberry Road, Wimbledon. At the time the school had 60 pupils.

In 1982 Jenny-Karin Shury was appointed as the first school secretary.  She stayed on for nearly 30 years and knows probably more about the school, pupils, staff and headteachers than anyone else.

In the beginning the school didn’t have its own telephone line, fax, photocopier and of course not a computer. To make a phone call, staff had to run across the road to the Beaumont Care Home. If they wanted to make a photocopy, they had to do a 25 minute walk to Wimbledon.

The school is still located in that beautiful Victorian building from 1840. Originally it was a private mansion owned by a doctor from Harley Street in London, who lived and had his doctor´s surgery in the building. In “peisestua” we can still see a bell button on the wall, which was used to call for the servants. 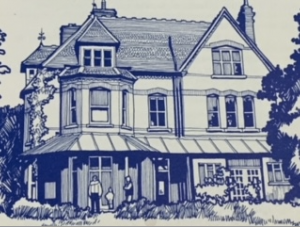 The school has had many purposes over the years. Among others it has been a home for nurses and a boarding house for the boys of Kings College, Wimbledon, who were very much in favour of the tennis court in the school grounds.

The story continues in the next newsletter.

Senior teacher at the Norwegian school in London