Members and friends of the NBCC are invited to attend a Leadership Series event with Chamber Board Director Pierre Gabriel Côté, Agent-General for Québec in the UK, as he shares insights and experiences from representing Québec in the UK, Ireland, and the Nordic Countries, as well as numerous management positions in the private sector.

This is a free event for NBCC members and friends, and you can sign up here. 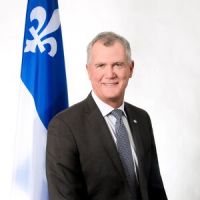 Pierre Gabriel Côté was appointed Agent-General of the Québec Government Office in London on July 27, 2019. Holder of a bachelor’s degree in mechanical engineering from Laval University, he is a member of the Ordre des ingénieurs du Québec. Since 2009, he has also held an ICD.D (Institute of Corporate Directors, Director) designation, obtained from the Desautels Faculty of Management at McGill University.

Throughout his career, Pierre Gabriel Côté has held numerous management positions. He has served as President and CEO of Lantic Sugar Ltd. from 2001 to 2005, President of Bombardier Aerospace (Business Aircraft Division) from 2006 to 2008, and President and Chief Executive Officer of Fibrek Inc. from 2008 to 2012. In December 2014, he was appointed President and CEO of Investissement Québec, a position he held until July 2019.

Concurrently with his duties, Mr. Côté has sat on the boards of directors of D-Box, the Centre de commercialisation en innovation manufacturière, and La Maison Michel-Sarrazin (end-of-life center for cancer patients). He has also contributed to several charitable fundraising campaigns as a promoter and a cyclist (Le Grand défi Pierre-Lavoie and Le tour Charles-Bruneau).